When preparing for RubyConf China 2020, I checked the recent patch for Fiber Scheduler in Ruby. When inspecting the example Scheduler, I found it’s using IO.select API in Ruby. IO.select API has multiple different implementations in Ruby. It may probably call poll, large-size select, or the POSIX select in the operating system. So I try to implement the I/O scheduler with faster syscalls like epoll, kqueue, and IOCP.

I proposed an issue to Ruby, but it was rejected. The major problem is that, the IO.select API is stateless. Without stateful registration, the performance is even getting lower when using epoll. It’s proved by the benchmark written by Koichi Sasada. After discussing with Samuel Williams on Twitter, he recommended me to directly hook the implementation of Scheduler, which the registration process is stateful. So I start a PoC gem development for Ruby 3 Scheduler interface.

The Ruby version mentioned in this article is:

The basic scheduler example is from the unit test used in Ruby. In general, this is a Proof of Concept of Ruby 3 Scheduler instead of a production-ready one. Mainly, it’s using IO.select for I/O multiplexing. So from this backbone, we are going to implement a better-performed Ruby Scheduler.

We have to do some C programming to support other system calls. But the first thing is to implement a C method that could be compatible with the original implementation.

For select/poll API, you don’t have to initialize a file descriptor first or register and deregister the interest during runtime. All you need to do is to run the select with the proper number of IOs when triggered.

We spent ten lines of C code for a single line of Ruby code. It makes no sense, but it gives the possibility for us to call other I/O multiplexing syscalls including epoll and kqueue, we add 4 C methods to the Scheduler API as following:

There are three major APIs for epoll, epoll_create, epoll_ctl, and epoll_wait, which is quite easy to be understood. We just need to create the epoll fd when Scheduler initialization, and call epoll_ctl during registration and deregistration, then replace the original IO.select with epoll_wait.

kqueue is similar. The only difference is the registration and waiting parts are the same API in BSD. It’s controlled by the parameter of kevent(), which is a little bit hard to understand. 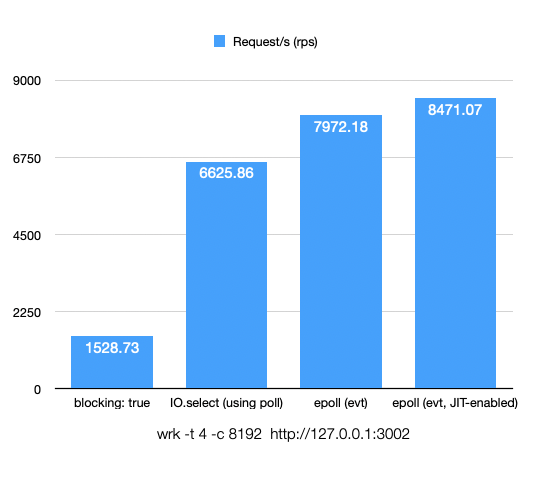 The benchmark is run under Intel(R) Xeon(R) CPU E3-1220L V2 @ 2.30GHz, and the program is single-threaded. With better CPUs, the difference between epoll and poll would be larger. Feel free to try the gem if you want.

Further works include two parts. To improve the stability of the current API, and to support more syscalls including io_uring and IOCP. But to be honest, io_uring is still fine, but I have zero knowledge on Windows development. So feel free to give some advice or to provide some contribution.